The Chinese government has issued a draft plan for lithium-ion battery companies to curb manufacturing projects that only expand capacity.

Anode material manufacturers will be encouraged to produce graphite material with specific capacities above 335Ah/kg, while electrolyte producers will be provided support to produce electrolytes with a water content of no more than 20ppm, hydrogen fluoride content lower than 50ppm, and metal impurity content below 1ppm.

The draft plan has been published for public comment and is subject to change.

Chinese battery manufacturers have boosted production capacities in recent years to meet rapid growths in demand from the new energy vehicle (NEV) sector. 700GWh of new production projects were planned in the first half of this year, according to market participants.

The country's largest power battery producer CATL in August unveiled plans to build 137 GWh/yr of lithium-ion battery capacity by raising Yn58.2bn from the stock market for five projects in the regions of Fujian, Guangdong, and Jiangsu.

China's total output of power batteries rose to 159.8GWh during January-October, up by 250pc compared with the same period of last year, while installed volumes increased by 168.1pc to 107.5GWh over the same period, according to data from the China Automotive Manufacturers Association (CAAM). CATL, BYD, and China Aviation LB were the top three battery manufacturers for installed volumes during January-October at 54.5GWh, 17.9GWh, and 6.4GWh respectively, accounting for 50.7pc, 16.6pc, and 6pc of the total. 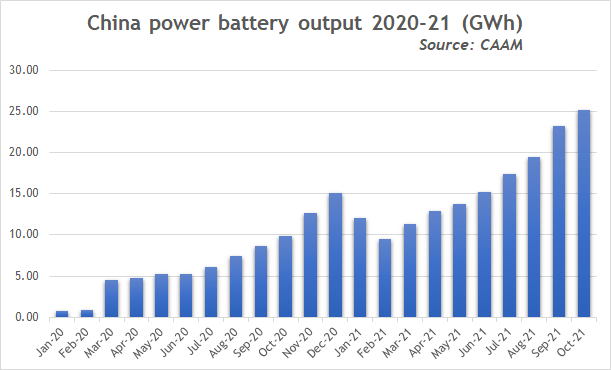 PREV
What Are The Advantages of Lithium Batteries in the Energy Storage Technology Industry?
NEXT
Lead-carbon Batteries: The Future King of Energy Storage
Related Products
Products